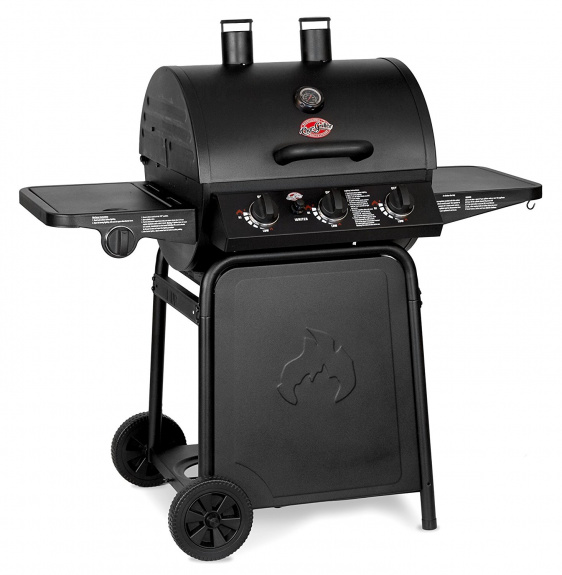 "You just can't get a better grill for this kind of money."

We would have given it a 5-star rating for those people who are not really looking for the best grill and are more concerned with the price. Those who don't mind the small flaws but cares more about cooking performance and the ability of the grill to stay useful for several years.

But since it does have flaws and just to be fair to those brands that make near perfect gas grills at a higher price, we gave this grill a final rating of 4.9/5.

The reason why the rating is still high despite the flaws is that its flaws aren't too bad and can easily be worked around.

For example: the side tables are unfoldable, side burner is fixed on the left side, the stacks may take some space when you open the lid -- these are small flaws but I can ignore them because I can easily work around these flaws by just finding a larger space or by moving it around since it has wheels.

The main reasons for the rating are the following:

First, it can be difficult to get a lower temperature out of this grill although you could get used to it. It's better to have a grill with high temperature than the ones who could only give off a low temperature.

Second, it is difficult to reach the gas valve to turn it on/off because the propane tank compartment is too small and tight. It is inconvenient but rest assured, the gas valve can definitely be reached it's just that it wouldn't be that simple especially if you have large hands. Some people work around this by putting the gas tank outside the grill cabinet.

Third, taking out the grease pan to clean it and putting it back is quite a difficult process because the grill has a tight body and the front panel is right in front of it. It can be pulled out but it isn't going to be a smooth, easy task to do.

For me, these are little things and when you are on a tight budget, you wouldn't mind these small hassles. The most important thing is that the grills cook great and it is made up of heavy duty materials compared with other grills at this price range.

Overall, it has some flaws but can be offset by its cooking performance and flexibility as well as its durability and lifespan.

A bonus is that when some parts get rusty or damaged which most grills will eventually after several years of use, you can fix it because parts are available for purchase from the manufacturer. Note: Common problem among grill owners that they are forced to buy a new grill because the parts that they need for their grill is not available which shortens the lifespan of the grill, a waste of money and a big hassle.

As a whole, the Char-Griller 3001 Gas Grill is a great cooking device that provides versatility. It does its job of grilling and at the same time you can warm food on the warming rack, the side burner allows you to cook in a pan, run a rotisserie and sear meat.

It has a battery-powered electric ignition starter that allows you to start up the grill in an instant and heat it up fast. It can heat up to 500 degrees in a few minutes although it can be quite a challenge to get a lower temperature with this grill. It has two stacks on the lid that serve as chimneys and as per the book, these stacks helps heat up the grill evenly. 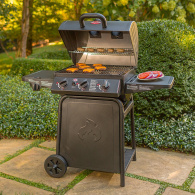 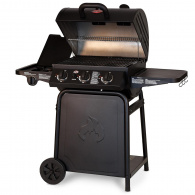 The grill uses heavy-duty cooking grates that are very solid and are easy to clean. On top of the main grill is a warming rack. The sides feature side table with utensil hooks that serve as your preparation workspace and a side burner that is used for cooking sauces in a pan allowing you to do several cooking tasks all at the same time near the grill saving you time, space, and energy.

The overall built of the grill is reliable. You can tell that the grill is largely made of heavy duty materials. At this price range, you'll be surprised at how well-built and thicker gauge of a metal is used for this grill. Plus, all parts are available for purchase when you need to replace some parts of the grill due to rust problems or damages. 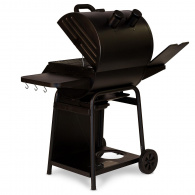 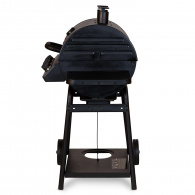 Does it have a side burner?

Does it have grease tray?

Is it LP or Natural Gas?

It is liquid propane (LP).

Is the propane tank supposed to fit in the hole in the bottom shelf? What is the long screw for?

The tank does not fit down in but on top of the hole and the long screw is to stabilize the tank.

Can you cook one burner at a time?

Can the side burner be mounted on the right side instead?

Why put stacks serves on the lid?

The book says it helps heat your food evenly. Also, in my opinion, the stacks keep the grill from getting too hot by venting out smoke. It does give out a good smell while you're grilling.

Is it high enough to roast a chicken?

Are there interior rocks or simulated charcoal?

No. Just the usual flame shield that most gas grills have.

What are side shelves made of?

What is the distance between grilling surface to the burners?

Does this come with a regulator and hose?

Can it be converted to natural gas?

There is no kit to convert it to natural gas at this time.

Does it include a tool for lifting the grates?

How to put the battery on the ignitor?

Turn the bezel on the ignitor button counter clockwise. It will pull out then insert an AA battery.

Do the side burner and shelf fold down?

What size are the wheels?

According to the manufacturer, the wheels are 7.5" in diameter and made of hard plastic.

What is the side burner used for?

It is used like a normal stove so you can cook in a pot or pan while grilling.

CHECK THE PRICE
Show Best Gas Grills
Follow us on
JOIN OUR NEWSLETTER
Ok, I am sure now
where to buy